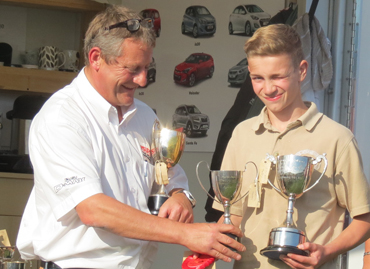 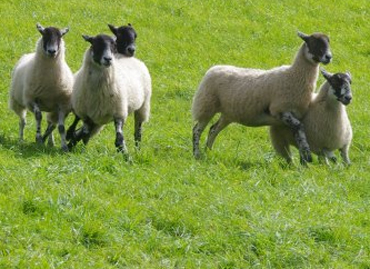 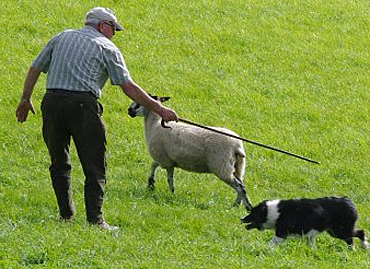 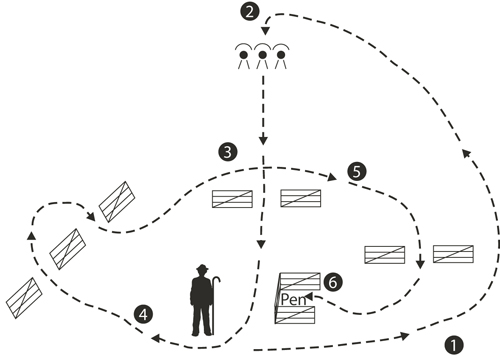 The dog is sent from the handler’s feet and should make a wide sweep to either left or right, ideally slowing down as the semi-circular movement is completed in a near direct line from the man.

This is probably the most critical part of the run, as the dog, having completed the outrun, should make a gentle approach to avoid startling the sheep. Sheep that panic as a result of a fast approach usually become very difficult to control from this point on.

Moving the sheep from the lift position, the dog is now required to bring the sheep at a steady pace towards the handler in the straightest possible line, negotiating a set of gates en route.

The first drive, at an angle away from the shepherd

with tight turns around the gates. Cross drive gates can be very difficult for the handler to judge, and some will intentionally bring sheep “off line” in order to obtain a better view as the sheep approach the gates.

There is frequently an element of good luck in this operation, as some sheep will walk into the pen, while others can become impossible. Ideally, the dog should bring the sheep at a gentle pace towards the pen mouth, while the handler takes up a position on the opposite side of the pen.

This is the final act in the Championship Trials, and where many good runs come to grief. Here the dog is required to show its ability to separate one or more sheep from the group, which must then be held away until the judge is satisfied that the dog is in control of the situation.

Championship of the Peak

In this competition, invitations are extended to the winners of previous trials held during the summer in the Peak District area, including top men and their dogs from England, Scotland and Wales.

Through the kindness of Mrs Lyn Mellor and David, we are very fortunate to be able to run trials over a natural testing course, set amidst fine scenery, where spectators can admire the skills of man and dog.